Rick Hansen was back in Newfoundland this week to celebrate the 30th Anniversary of his Man in Motion World Tour! Inspired by the dream of a world accessible and inclusive for all, and a passion to make a difference in the lives of others, Rick Hansen set out on his legendary journey on March 21, 1985. He brought international attention to the need for accessibility for people with disabilities by circling the globe in his wheelchair. Rick traveled over 40,000 kilometres, through 34 countries and 4 continents.

It was on August 25th, 1986 that Rick and his team returned to Canada, starting their journey back to Vancouver at the eastern most part of the country, in Cape Spear. 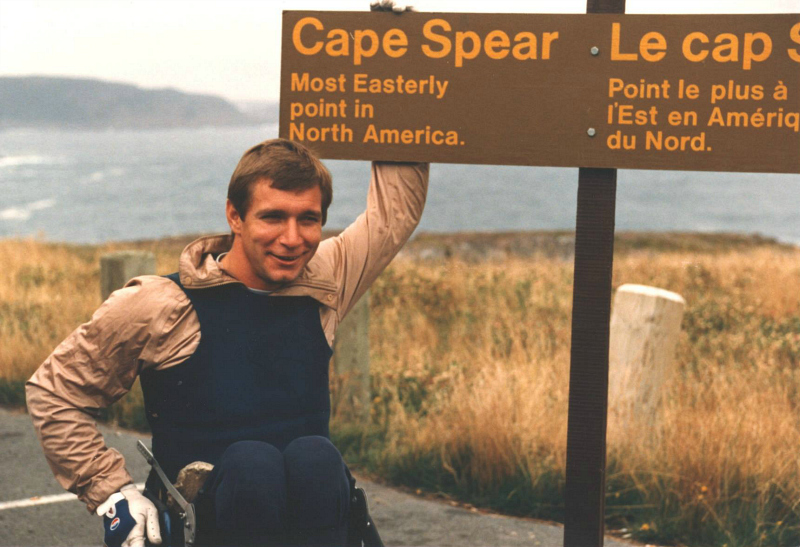 Rick suffered a spinal cord injury at the age of fifteen, and he realized early on that one of the biggest barriers for people with disabilities was other people’s attitudes and perceptions of their capabilities. Rick was determined to change that.

The Man in Motion World Tour was a success, raising $26 million for spinal cord research and quality of life initiatives, and heightening worldwide awareness of the potential of people with disabilities

In the 30 years since then, great strides have been made towards improving community access for all people with disabilities. This includes increased employment, improved transportation and better access to education, recreation and housing. Rick Hansen sees the need for increased awareness, however, and remains committed to facilitating changes to the barriers that stand in the way of people with disabilities reaching their full potential.


The Rick Hansen Foundation was established in 1988, following the completion of the Man In Motion World Tour. It's mission is to inspire leaders, influencers, and the public to join Rick Hansen in creating a global movement to remove barriers in the built environment and thereby liberate the potential of people living with disabilities.

As a gold-medal Paralympian and World Champion, Rick is passionate about sport. He believes that sport plays a crucial role in realizing his dream of creating healthy and inclusive communities. Rick says there are many Newfoundland athletes and role models who have inspired him. People like Mel Fitzgerald, Joanne MacDonald, and current para-athletes Liam Hickey and Katarina Roxon.

Rick spoke about the amazing transformation in attitudes, in acceptance and in levels of inclusion in sport for athletes with disabilities in recent years, and he says that with the 2016 Paralympics coming up, "The more we hear stories of athletic accomplishments, and the more we can focus on ability, the sooner we can get rid of the negative stigma that existed in the 80's and 90's."

It's because of people like Rick Hansen, and Terry Fox, and Nick Foley, creating awareness and promoting inclusion and acceptance, that things are changing in a positive direction. The future for my boy is looking brighter! Do I still worry? Of course. But I know that I am not alone, and that we will continue to advocate and work to change the stereotypes and prejudices regarding people with disabilities.

Finding my own voice and form of advocacy using this blog has been an incredible journey, and I am learning every day. I dream of a world where people with disabilities will be accepted, loved, and understood by everyone. Changing the world is hard but important work. We need to raise children who see each other with love, who know and live life with compassion, and who embrace each others differences. We all choose every day how to live our lives and today, once again, I choose to try and make a difference.

“I honestly believe that my best work is in front, not behind me. I am driven by a deep passion and need to make a difference and leave this world a little better than when I arrived. That’s what keeps me going.” -Rick Hansen

I also want to mention here that Rick Hansen's daughter, Emma has a beautiful blog - Sincerely, Emma - where she shared the touching story of the still birth of her baby, Reid. Since that post went viral last year, her blog has become a safe place where other mothers share their experiences and stories of love, despair, loss, and hope. It is a "community-run blog inspired by the sisterhood of motherhood in loss, with a focus on supporting open discussions about the many layers that develop while living with half your heart in heaven." So beautiful, and so brave.