My plan for this Tulip Tales series initially was to feature one child each month, but I just can't wait that long! I am excited to share these touching stories, and so I will post them as I get them. Each of these children are remarkable and their stories need to be told.

That being said, I was so happy to hear from Holly, the mother of a beautiful little girl named Nevaeh (that's heaven spelled backwards). Holly told me that her daughter had an amazing story to tell, and she wasn't kidding! I am so glad that she reached out, and I am honoured to be able to share her journey with you.

In March of 2009, my fiancee passed away after a courageous battle with Cancer.
Joey fought with everything he had. Right up until the end, he had wanted us to lead a normal life, and we'd tried our best.

In December of 2008, I was driving to the Village Mall to do some Christmas shopping when my phone rang, and I knew right away it was the hospital. It was one of the nurses from the Cancer clinic saying she had to ask me a personal question. She asked me if I was on birth control, and she said that because of the new treatments they were going to start Joey on, it was recommended that I NOT get pregnant, because they didn't know what the side effects might be. I remember pulling over and breaking down crying. I wasn't on birth control. We had been trying for 13 months to have a baby, and now she was telling me that we never could. It was devastating.

On December 10th, just days after my 25th birthday, I decided to buy a pregnancy test anyway, though I was certain it was going to be negative, just like the rest. Nope, it was positive! Follow-up tests determined that I was seven weeks along. I had gotten pregnant before doctors told me I wasn't allowed to. So.. now what?

The doctors were baffled and uncertain, so they sent me to IWK in Halifax to have a chorionic villous sample taken. A CVS is a form of prenatal diagnosis where they examine a piece of the placenta. They check the DNA to detect any chromosomal or genetic disorders in the fetus. It was scary. Chemotherapy drugs could have made my baby blind, deaf, deformed, or have any number of syndromes. They just didn't know.

Nine days later, I was doing dishes at home when the phone rang. It was the IWK, saying that our tests were back and things looked perfect! At thirteen weeks, I was told we were having a healthy baby girl! We were ecstatic!

However, our excitement was short lived. Joey's health went downhill, and on March 5th of 2009, he lost his battle with Cancer. I was 20 weeks pregnant.

Fast forward to July 27th, 2009. On a bright sunny morning, weighing 7 lbs 1 oz., Nevaeh Joey Denine came screaming into the world at 8:53am. It was a bittersweet moment for our whole family. We had a little piece of Joey with us, and we couldn't wait to tell her all about what an amazing man her Dad had been. 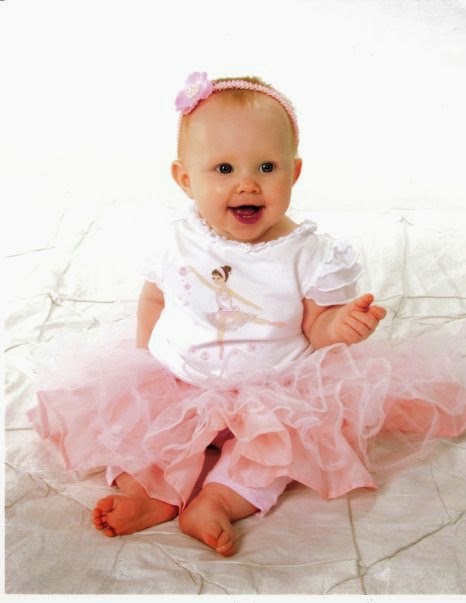 At 22 months old, Nevaeh was a beautiful, healthy, blue-eyed, strawberry blond little girl. She did get frequent urinary tract infections, but I knew they were fairly common in children, so I wasn't overly concerned. We went for a routine ultrasound to check for kidney reflux, and I will never forget the radiologist singing this 'kitty' song over and over again as she took the pictures. It haunts me to this day. She turned the lights on and said "Ok Mom, I have to get the head radiologist to look, but I think your daughter has Cancer." Nevaeh's grandmother broke down. I just nodded and said "Ok, I can do this."  That's all I remember besides calling my family to come out. I was numb. I wouldn't respond to the doctors, I just laid on the couch and looked at the ceiling.

We were admitted right away. She had bone scans, CT scans, bone marrow biopsies, blood work, among other testing. I think that was the hardest.. waiting for results. One scan took an hour, so we had to put her to sleep, and I just sat at the side of the machine crying and praying.

We discovered that Nevaeh had Stage 1 Neuroblastoma over her right kidney.


Surgery was scheduled for the following week. I just wanted this monster out of my daughter's body. They removed the tumor (about 2 cm by 2 cm), and her right adrenal gland. She did great! She was a very lucky little girl, and we were so thankful. We had to come back for follow-up tests and ultrasounds every six months.  For me, those were the scariest days of my life, for Nevaeh they were just check-ups and a couple of nice stickers!
Nevaeh grew to be, and still is an amazing child, with an infectious laugh and a deep love of all animals. She has an incredible spirit, and that is what has kept us going. 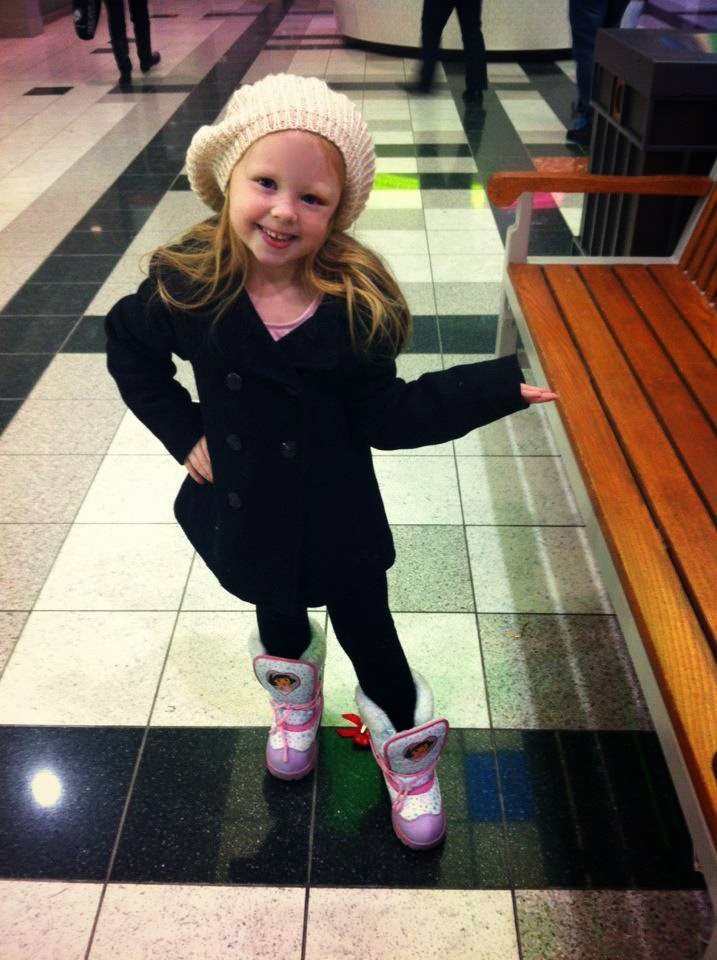 In November 2013, over two and a half years after her scare with Cancer, I came home from work to find that Nevaeh had a black eye. No one knew what happened, not her daycare, family or friends. It was a little concerning, but kids will be kids, we thought.

A week later, I took her to our family doctor, but she wasn't concerned.  It was only a black eye, and there didn't appear to be any other damage. By December, she'd had a black eye for a month, and I knew that was not normal. I was beyond frustrated. After taking her to the family doctor and the ER twice with no success, I'd had enough. I wanted answers, so I turned around in the middle of the road on my way to work and picked her back up from daycare, put her jacket back on and went out the door. I needed an explanation. I knew deep down something was wrong.

On December 20th, 2013 (Joey's birthday), Nevaeh had a full body MRI. I knew it was bad, I just knew. On December 23, I found out that I was right. Her Cancer was back, and with a vengeance, almost everywhere in her little body, except for her organs and brain. We were in for the fight of our lives, and we had all intentions of fighting as hard as we could. I decided not to tell our family until after the new year. I had no idea what next Christmas would bring and I wanted this one to be as normal as possible for her.

After bone scans, MRI, CT Scan and travelling to Halifax for a MIBG scan, we knew what monster we were facing. Neuroblastoma.  But Neuroblastoma didn't know who it was facing - a fighter named Nevaeh! 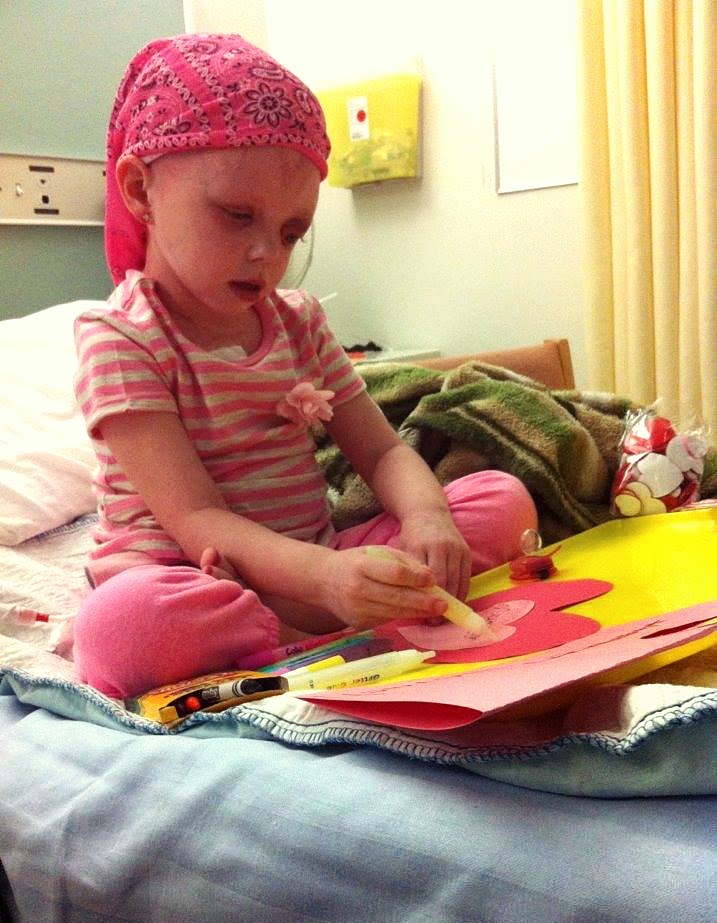 She started chemotherapy in January of this year, and so far she is responding well. We went to Toronto Sick Kids in March, where Nevaeh had a stem cell harvest. It's almost like a dialysis machine, it takes your blood and skims the stem cells off. All cells in your blood weigh differently - plasma, platelets, stem cells, white blood cells. It is amazing what technology can do. For two days, Nevaeh had to be hooked up to the machine for 6 hours to retrieve stem cells, one bag for her transplant in June and two more "spares". The photo of her with the guitar is while doing the stem cell extraction. 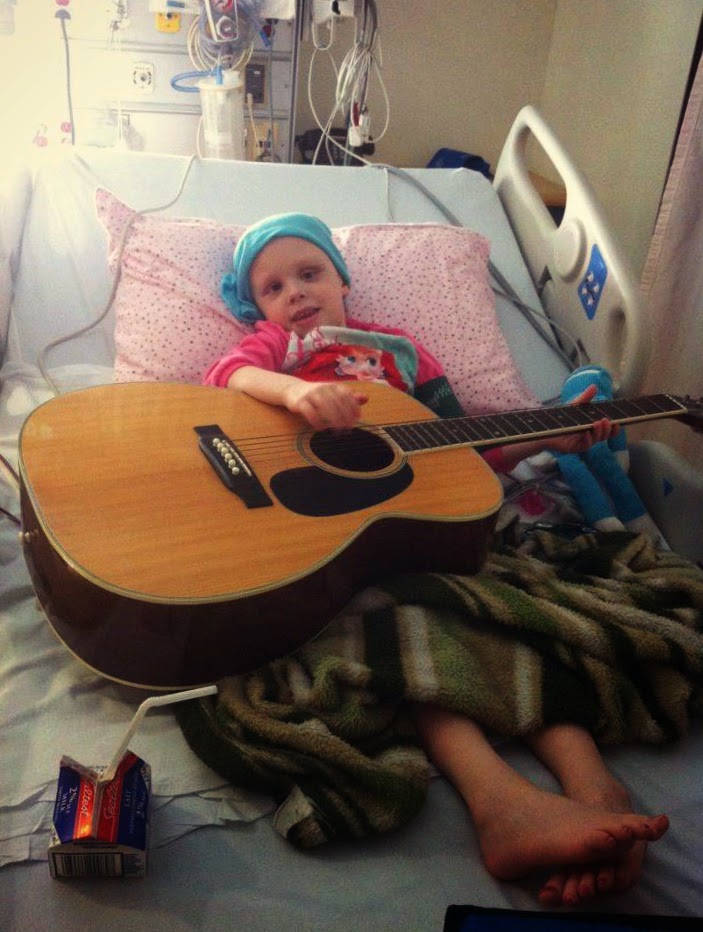 We will return to Sick Kids in June for seven weeks. Nevaeh will have a very strong dose of chemo at that time, and they will transfuse the stem cells back into her body. We found out last week that the cells are 100% Neuroblastoma free after her first two rounds of treatment!!! It is a hard road to recovery but we can do it. When we come home, she will start radiation, have surgery if necessary and then start an immune therapy drug. Nevaeh is on her way down the road to wellness. We are far from out of the woods but she is a fighter. She likes to say "Let's go kick Cancer's butt, Mom!" 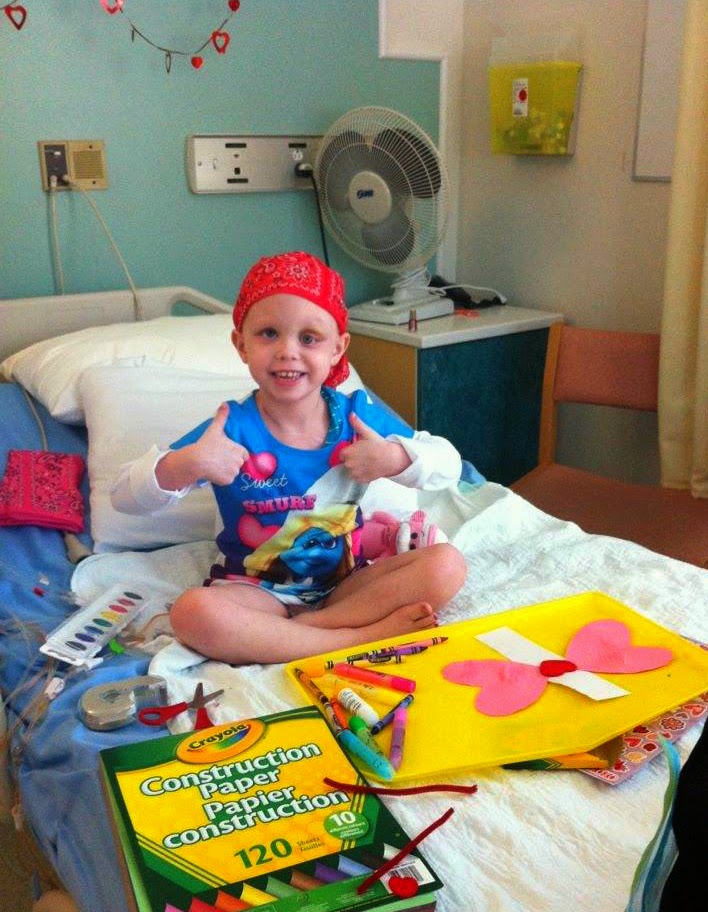 Nevaeh still participates in her regular activities. She attends Kinder Start, goes to play groups and has attended 'Shave for the Brave', winter carnivals, and other social events to help other kids learn about her condition. Our goal when she is finished is to raise awareness and money for Neuroblastoma research. We want to pay it forward in some way. Our community has been such an overwhelming support to us, and we want to give back. Nevaeh's journey won't end when she finishes treatments. She will have scans and tests for the rest of her life. 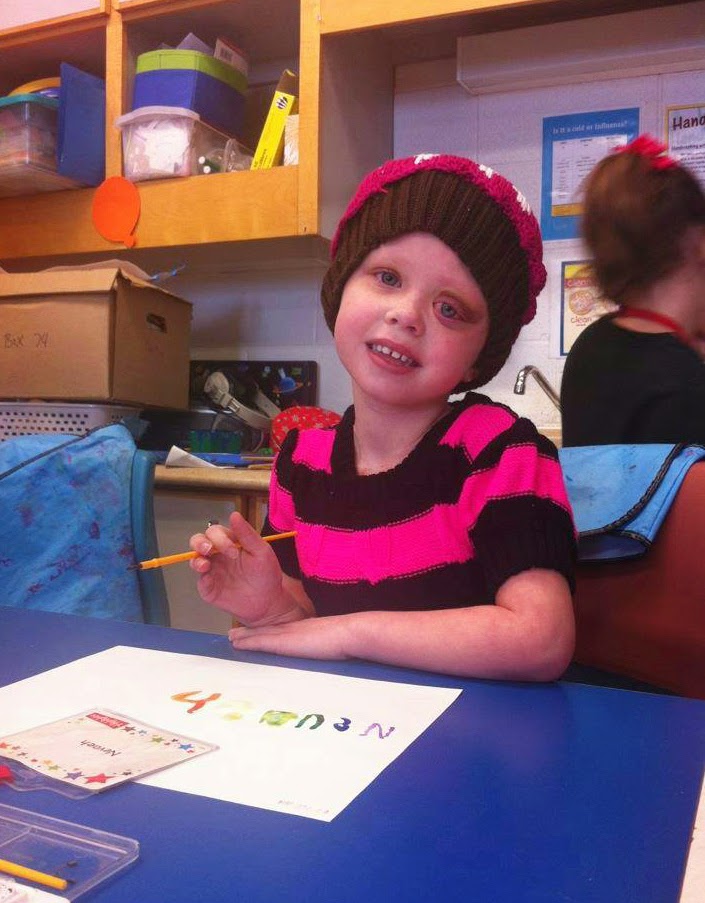 Every time someone asks how I am, I can only say "If she has a good day, so do I".
Nevaeh is my hero, and I am blessed to have her in my life.

In her own words:
When asked how she feels about having Cancer, Nevaeh said "I'm happy because I feel a lot better and can climb and walk again." (Nevaeh had developed a limp and bone pain before starting treatment, that has since resolved). She said, "I'm happy my eye is better, and I like having no hair, because I don't have to get tangles brushed out. I'm special like little girls and boys like me 'cause people know we are heroes when they see us with no hair."
I read this part back to her and she said. "Mom, write also that I'm happy to be me!"

Thank you, Holly (and Nevaeh!). Most of us cannot imagine our child going through so much at such a tender age, and to see the photos of Nevaeh with that big smile on her face fills me with awe and admiration. The one thing I hope to accomplish with these stories is that people will see the love and support that surrounds these children. I hope that in visiting my blog, people will begin to think of children with special needs and medical issues as they think of their own children.. with love and compassion and understanding. I am grateful that you chose to share your amazing daughter with us! I wish her all the best with her upcoming treatments, and I hope for a big, beautiful life for her!

You can follow Nevaeh's journey on her facebook page here - Happiness for Nevaeh
and support Nevaeh's Lemonade Stand here - https://www.facebook.com/nevaehlemonade