Liam Hickey - No Leg, No Problem

According to the Canadian Paralympic Committee, "Parasport is sport for people with a disability. It is "para"llel to sport for able-bodied athletes, with adapted equipment or rules to make the game fun and accessible for everyone. There are also some parasports that do not have an able-bodied equivalent."

The Parapan American Games are a regional qualifying event for the Paralympic Games. This weekend, Easter Seals hosted a Parapan Am Celebration - a "Try-it" day of parasports. Activities included Wheelchair Basketball, Boccia and Goal Ball. People of all ages and abilities were invited to this special event which provided opportunities to watch exciting demos and meet some local Parasport athletes.

Brennen and I were super excited to meet Wheelchair Basketball Athlete, Liam Hickey. 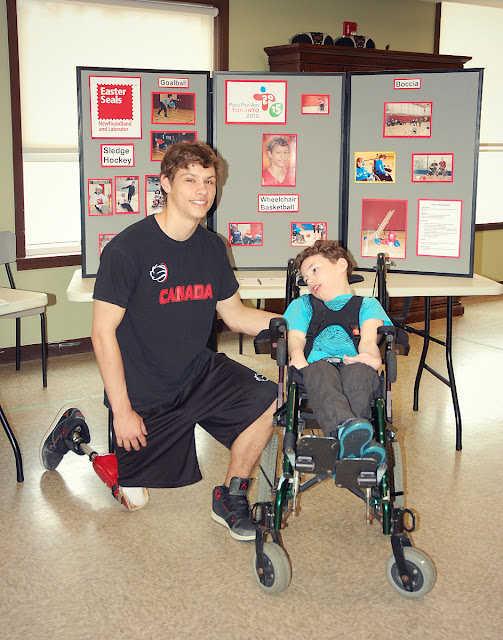 Liam was born without a femur in his right leg, known as congenital proximal femoral focal deficiency. Several surgeries at four and five years old left him with a bendable knee and an artificial lower leg.

Liam has always had a passion for sports, and started playing stand-up basketball with his peers at a very early age. He kept up with his friends until they got a bit older and the game became faster paced. With his prosthetic leg, he found it difficult to compete. He started playing wheelchair basketball at Easter Seals when he was about ten years old, and obviously had tremendous skill, because when he was eleven, he got called up to the junior team with Team Canada.

Newfoundland does not have a wheelchair basketball league, so Liam was invited to play for the PEI Mustangs in the Maritime Wheelchair Basketball League (MWBL). Earlier this year, Liam led the Prince Edward Island team to a best-ever fourth place finish at the 2015 Canada Winter Games.

Liam will compete with Team Canada in Toronto in August at the Parapan Am Games. If the team finishes in one of the top two spots, they will head to Rio de Janeiro in 2016 for the Paralympic Games. 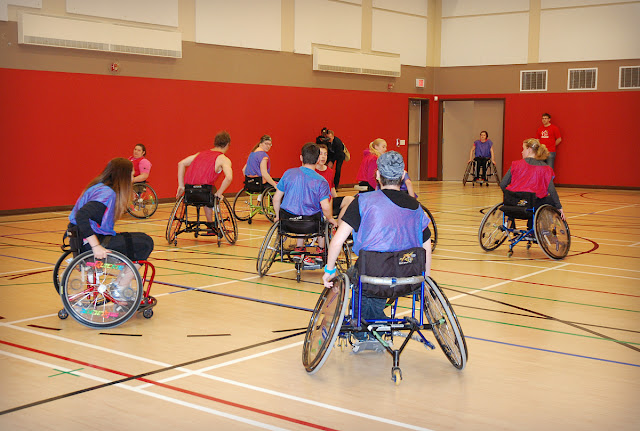 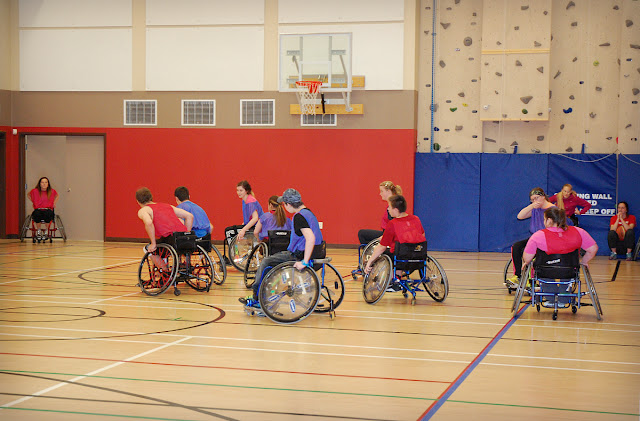 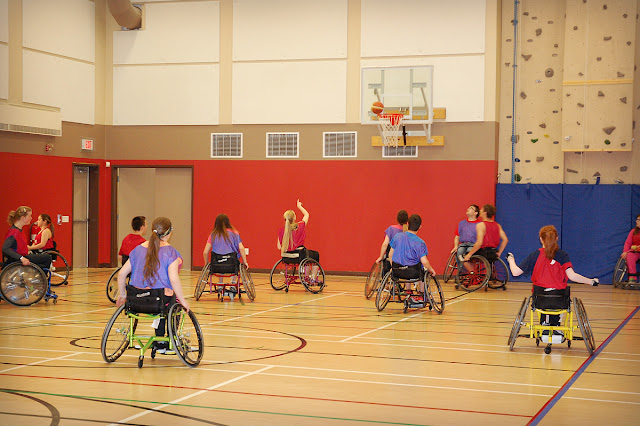 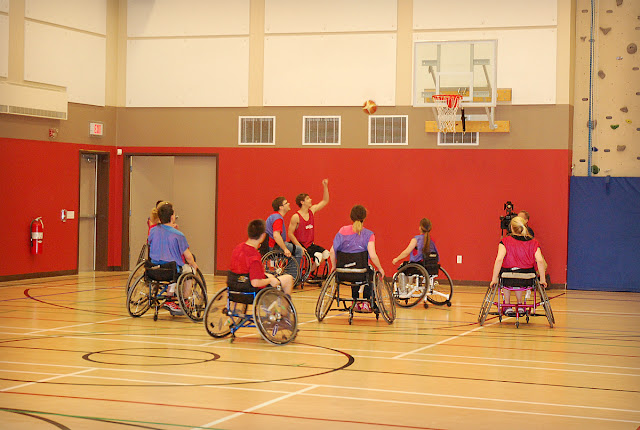 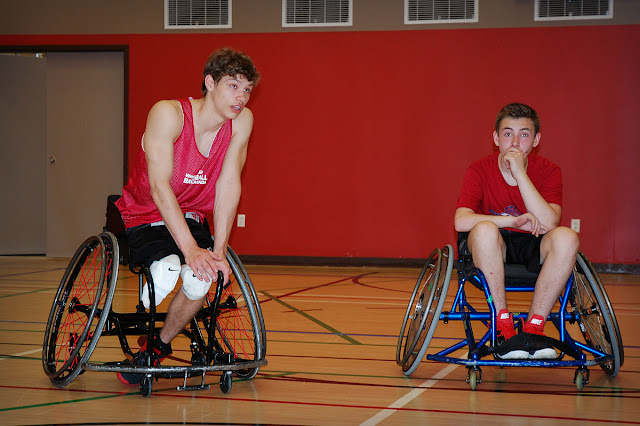 Watching Liam and the other players work their way around the court, I was amazed at their incredible drive and determination, and I can only imagine how that would be magnified on a National level. With athletes with varying disabilities and varying levels of ability, I wondered where Liam felt he fit in. I asked him, "Do you consider yourself “disabled”? How / where do you feel you fit in with the disabled community?"

Liam replied, "No, personally I do not consider myself "disabled". To me the word "disability" is just a word. A disability isn't a disability unless you let yourself think it is. The moment you let that happen you're already limiting yourself. I try to fit in to the "disabled" community as a leader and role model. I think if other "disabled" kids and people in general see where I have gotten with hard work and determination, it will open their minds up to the endless possibilities out there. I also want to set an example for all of the "able-bodied" people and show them that there are no limits - "disabled" or not."

Me: Tell me a little about yourself growing up. Did you believe that you wouldn’t be able to be involved in sports because of your leg?

Liam: "As a kid growing up, I was always very competitive and received that competitive nature from my parents, who were both talented athletes through high school and in their university days. I was always playing some sort of sport growing up. Whether it was having a catch and playing stand-up basketball with my Dad, or playing ball hockey with my friends. Dad has always showed me how to be competitive yet a good sport at the same time. My Dad played fast pitch softball for many years in his late 30's and I think seeing the way he handled himself on and off the field really showed me how I should act as a player and as a person in general. All of my family have been very supportive of me while growing up, especially my sister Megan. They helped me believe that I could do anything I wanted. So no, I never really had the thought that I wouldn't be able to do just as much as other kids."

Liam hopes his story will inspire others to not let their disabilities get in the way of what they want to achieve. Anything is possible. The world of opportunities for people with disabilities continues to expand, and will do so as long as we support the idea that everyone has the potential to enhance their quality of life and realize their dreams.

Liam has made his dream a reality. I am inspired by his incredible strength, courage and determination. In an age where the media highlights some less-than-encouraging role models and questionable celebrity influences, Liam is someone who is truly worth admiring. 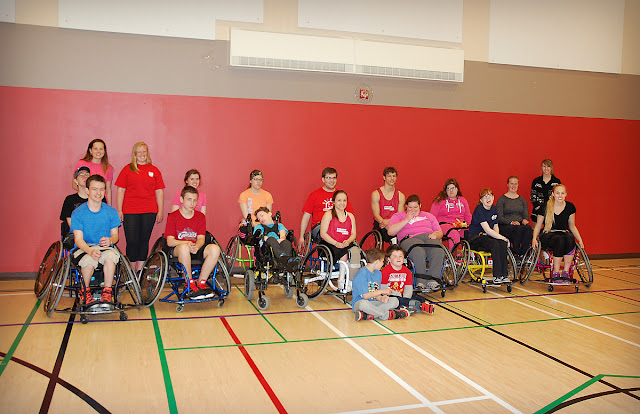 Follow Team Canada on route to the Toronto 2015 Parapan Am Games and Rio 2016 Paralympic Games by accessing all of the latest news, events, and results at www.wheelchairbasketball.ca