Throughout a pregnancy, you think about all of the little things, like what you will name your baby. Will they have blue or brown eyes? How much will they weigh? And of course, the most important question: Will they be healthy when they arrive. Thanks to advances in technology, it is becoming easier and easier to detect any abnormalities before you've given birth. It's amazing, really. But what's also amazing (and scary) is how much can go undetected.

Alisha shares the story of her young daughter, Paisley.

I had a fairly normal pregnancy. I found out that I was expecting in January 2014, when I was four weeks and five days along. I went to all of my prenatal appointments, took my vitamins and rested the best I could. My eighteen week anatomy scan came and went like a breeze. Everything looked fine. At twenty-two weeks, I opted to have a 3D ultrasound to see if my little bean was a boy or girl. We were so excited to actually be able to see our baby's face, and even more excited to find out that we would be having a little girl! None of my four ultrasounds ever indicated that there was anything abnormal about my baby. At thirty weeks, I was diagnosed with gestational diabetes. As a precaution, my doctor decided I would get induced at forty weeks; on September 23rd. That day turned out to be the best and also the worst day of my life. 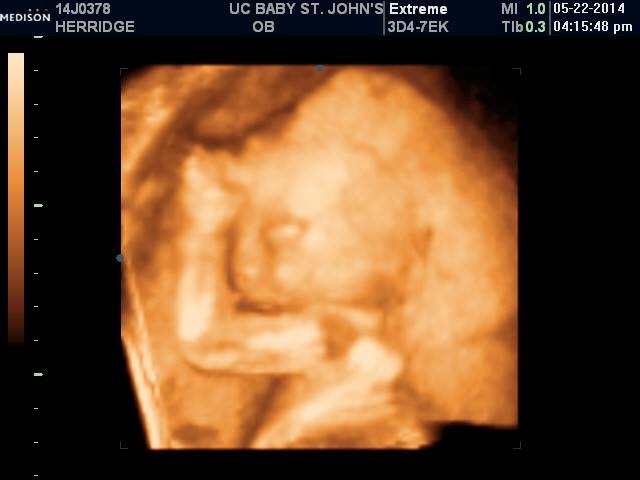 Because of some complications, it was decided that we wouldn't go ahead with the induction but that I would have a Cesarean section instead. They wheeled me away to the OR, and at 2:06 p.m., Paisley was born! Hearing her cry for the first time is something that I will never forget. 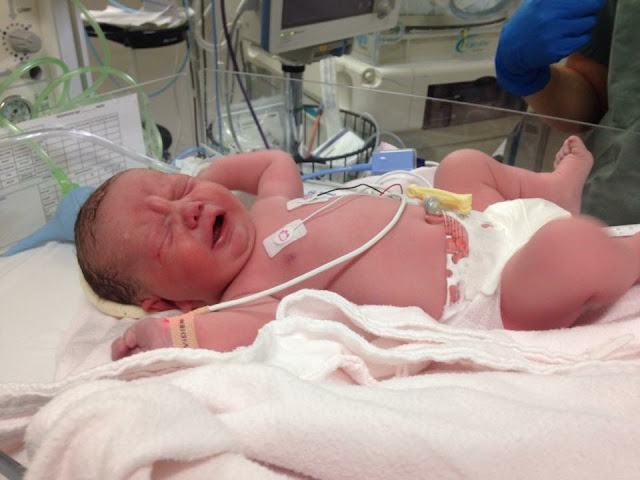 When they got back to the nursery with Paisley, they started to notice that her breathing was a bit off. It took what seemed like forever for someone to come and update me on how she was. The nurse finally came in and told me she noticed a hole in the roof of Paisley's mouth while trying to feed her. As it turned out, the trouble breathing was being caused by her tongue blocking her airway. So, not only did we discover that she had a cleft palate, but she also couldn't breathe properly. The local hospital wasn't equipped to deal with this, so she was airlifted to the Janeway Children's Hospital in St. John's (three hours away by car) the next morning. Her dad left for the city as soon as he could, but I couldn't go.

I was heartbroken. The life I had imagined with my little girl seemed like it was destroyed. How would this affect her speech? How would she eat? Would she need an apnea monitor for the rest of her life? It seemed like all the little questions I had asked myself over the last nine months were mocking me, as we were faced with a series of much more serious questions.

I got to St. John's three days later, and finally held my daughter for the first time. It wasn't as magical as I had pictured it being. There were wires everywhere, monitors were beeping constantly, and we were laying in a huge hospital chair surrounded by a green curtain. I stared at her oxygen monitor more than I stared at her. It was tense, sad and uncomfortable. 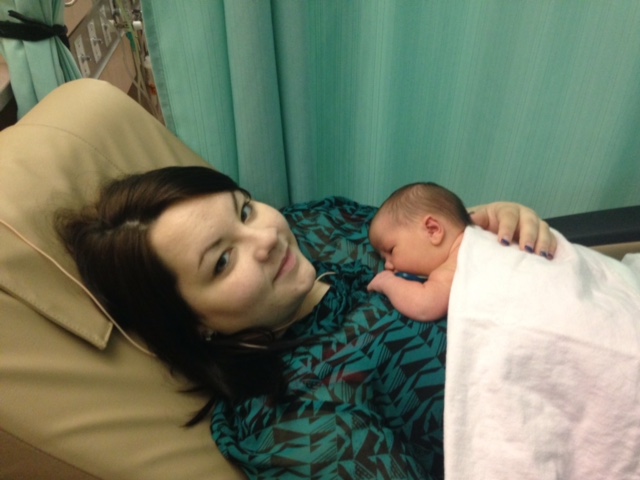 They diagnosed Paisley with Pierre Robin Sequence. This is characterized by a cleft (or high) palate, glossotopsis, and micrognathia. In simple terms, she has a cleft palate, a larger tongue and a smaller than normal jaw. This causes problems breathing and eating, which leads to problems gaining weight in infancy. The jaw does some catch-up growth in the first year, so the breathing problem eventually should resolve itself, except in serious cases. It's hard to detect by a basic ultrasound, and even with a 3D ultrasound this condition isn't easily picked up on.

The following weeks were long. Paisley was required to lay on her belly or side at all times. She started off on a feeding tube but eventually with the help of an occupational therapist, we tried feeding her with a special bottle. She hardly drank anything. It exhausted her. She would drink 10-20 ml from her bottle, then most of her formula ended up going in her feeding tube so she wouldn't starve. But every day that she took even a little more from the bottle than the last, we celebrated. We were proud, even if she had only managed to drink 10 ml.

Even simply holding her was a challenge, as she was always in an awkward position to keep her tongue from blocking her airway. The positioning seemed like it wasn't enough to keep her airway open, so doctors inserted an NP tube to assist her. 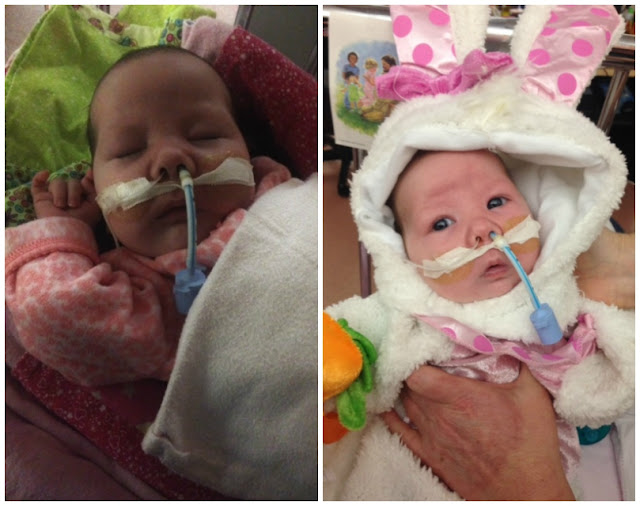 The NP tube helped immensely. We could hold her however we wanted. She got better at drinking her bottle, she started to gain more weight and in turn, her jaw began to grow outward. They took out her NP tube on November 1st - one of the best days of my life! Finally, I could see my child without tubes in her nose. 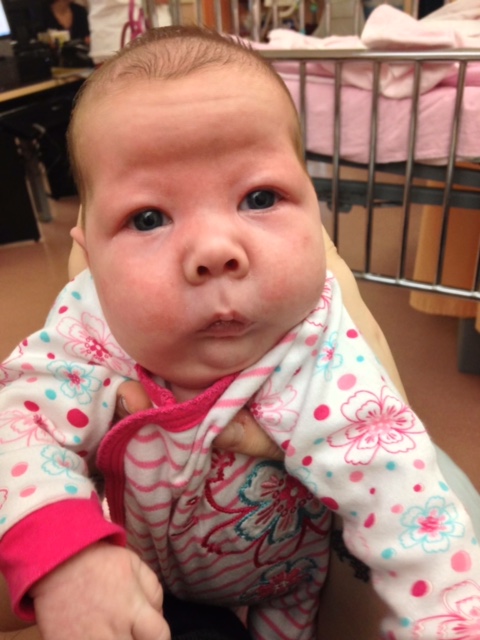 The next few weeks flew by. She got better and better at bottle feeding and she had no episodes of decreased oxygen. On November 22nd, we finally returned home to Burin - just a day before Paisley was two months old.

Things have only gotten easier since then. Paisley is now 11 months old, and weighs twenty three pounds. She loves to eat. She can say "Mom", "Nan", and "uh oh". She loves to dance and she loves crawling after our dogs. She's come so far from being the baby with tubes in her nostrils. We still go to the Janeway for check-ups every three months, and we're hoping to have her palate repaired by January 2016. 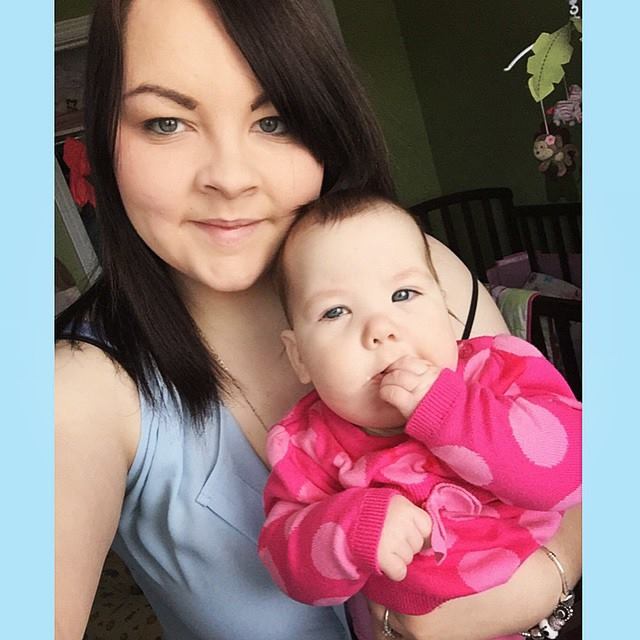 Becoming a mother has made me stronger than I ever thought I could be, and has made me realize how much the little moments mean in life. We don't take anything for granted. 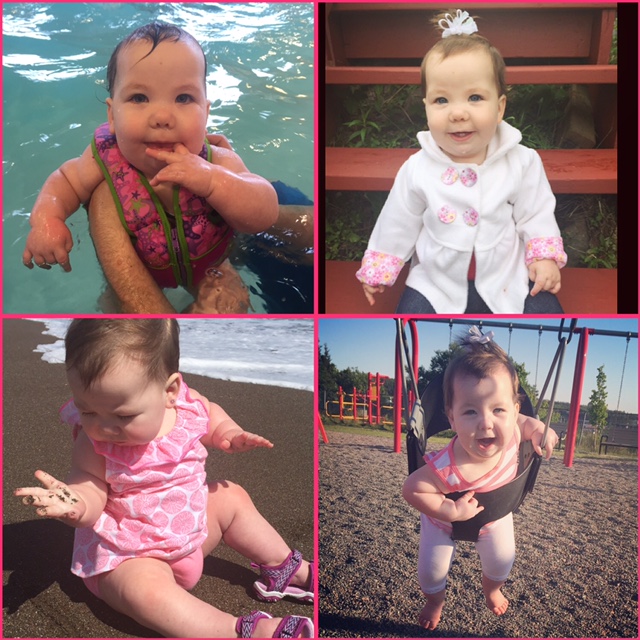 Alisha, thank you for sharing your daughter's story with us! It must have been so difficult not being able to be with her those first couple of days, but hopefully the hardest part is behind you. It's crazy how life can be so scary and unpredictable, yet beautiful and amazing all at the same time. Paisley is a beautiful little girl, and I'm sure she has a bright future ahead of her! Enjoy the journey, whatever it may bring!

If you would like to be featured on Tulip Tales, please email me at: juliebrocklehurst@hotmail.com  Please include a brief description of your child and their condition, along with any pictures you would like to share. I will contact you with specific questions.