Jes Sachse is a Toronto-based writer, journalist, artist and curator. Moreover, Jes is a story-teller. With a rare genetic condition known as Freeman-Sheldon syndrome, Jes has unique facial features, a curved spine and their right leg is a bit shorter than the left, but Jes is very positive and forward-thinking. Jes identifies as genderqueer and prefers non-gendered pronouns (they, them and their in place of he or she). Their passion is disability, whether through writing or art. It is a daily lived experience that is intricately tethered to how they exist.

Jes was in St. John's recently to take part in HOLD FAST - A Contemporary Arts Festival presented by Eastern Edge Gallery. I had the pleasure of meeting Jes at the festival's opening night 'Fancy Artist Talks'. 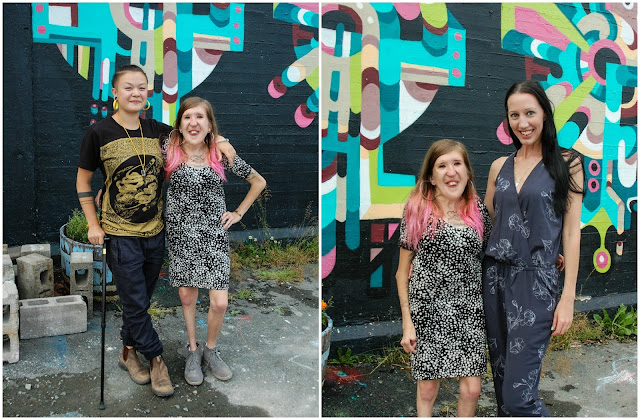 Jes's work was featured in the Hold Fast 'Art Crawl', in which artists from across Canada presented projects throughout the city over the course of a single evening. Jes created a curtain of over 12,000 drinking straws that was displayed at St. John's City Hall. The piece is entitled "Freedom Tube", and it links to disability culture and the idea that a drinking straw, to most people, is just a drinking straw, but to many people with a disability, it represents a sense of freedom and independence. Jes explained it's meaning by telling the story of buying a coffee for their friend, who also had a disability:

“Eliza, are you able to do take-out cup lids, like, put your mouth on it and sip?” She laughed and she’s like, “No!”, like I asked the stupidest question. And I started explaining that generally I deal with the fact that I can’t do it either by using a straw. And without missing a beat, she turns her head around at me and says,“You mean ‘freedom tube’”.

"It became this object that I then, as a visual artist, immediately connected to, and I wasn't able to sleep after she said that to me. I was remembering every time I’ve ever seen a disabled person use a straw. I kept imagining straws - the classic red and white bendies, thousands of them in front of me. Sitting, creating long strands of piping, weaving them together in a sort of tapestry. The straws becoming a network of straws - one for every cup of coffee, one for every daily adjustment to make bodies "fit". And with patience and the passing of time, this mundane ritual becoming something larger. Together the straws will become a structure - an iconography of culture, and an honouring of an invisible tradition." 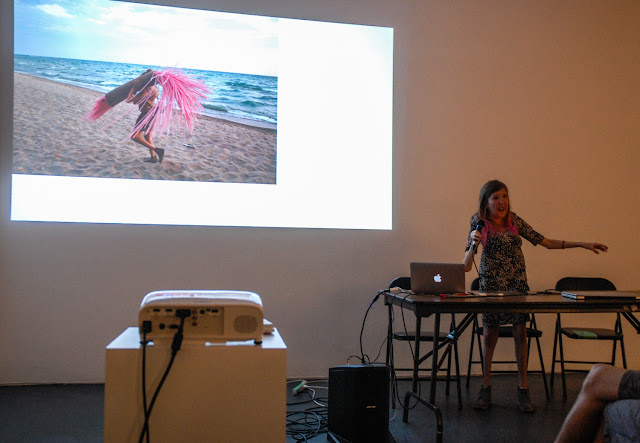 Freedom Tube has already had several incarnations, and is forever a work in progress. It does not have a finalized form. It is a new show, a new exhibit every time. Jes starts each new installation from scratch because the labour of the work is just as much a part of it. Very much a proponent of community-based art, Jes believes that it is important to focus on the ways that communities can contribute to the process of art-making. They invite people to not only visit their work, but to participate as well.

On Saturday, I met Jes at City Hall and spent several hours helping put straws together!

"Aesthetically, I’m a little in love.", said Jes. "I have a penchant for pretty things, and this is a very pretty thing. It’s pink and pretty and fun and I kind of feel like I’m at a birthday party. The straws are very uplifting en mass." 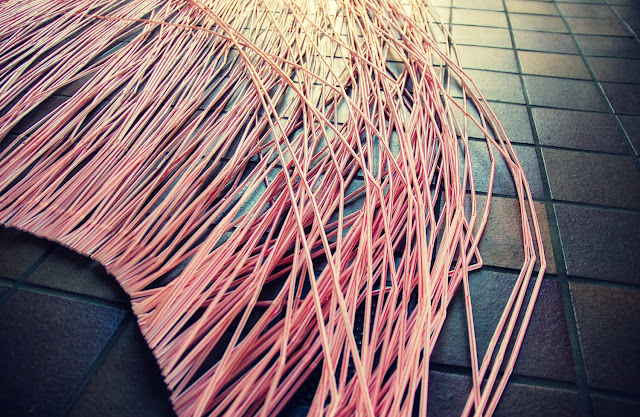 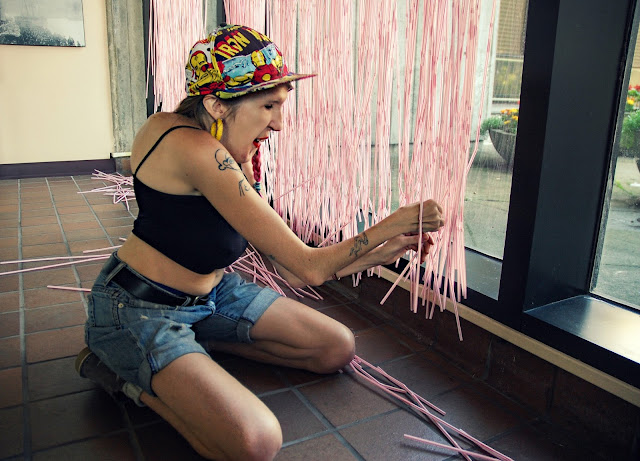 We had a great discussion about disabilities, perception, and the role of the internet and digital media. It is interesting that once you put something out in the public domain, you have little control over how people interpret it, and as an artist, Jes uses their art to make social statements.

If you think Jes looks familiar, it's because they went viral back in 2010 when starring in a series of photographs taken by Holly Norris, spoofing advertisements by American Apparel. The series was called “American Able”, and included 13 recreations of actual American Apparel ads. The photos challenged the retailer's claim that the models in their provocative ads are just "ordinary people". 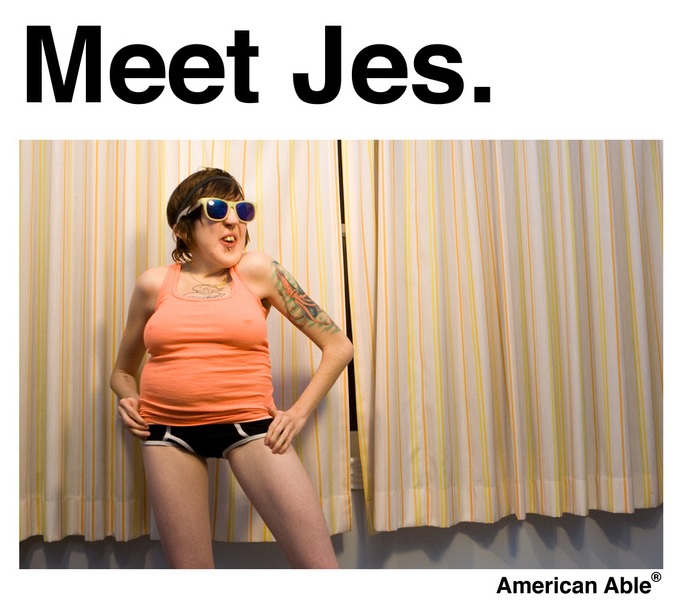 American Apparel gave permission to display the photos in fifty Toronto subway stations, and both Holly and Jes were floored by all of the negative feedback. They heard comments that the photos had "shock value", that they were "ugly", "disturbing" and even "grotesque". The photographer replied with "Those are photos of Jes. Why does Jes’s body have a shock value? Why is it that people’s disabilities are so unseen that there’s a shock value there? There shouldn’t be.”

With Jes's latest installation of Freedom Tube, they continue on the path of making people stop and look, and hopefully also making people think.

"I needed it to not be something you can pass by and think an easy thing about. It makes you ask questions about what it is or what it’s trying to do, which is what I decided was enough." 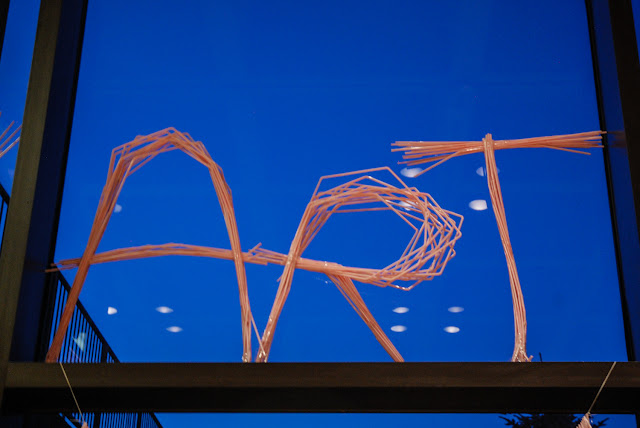 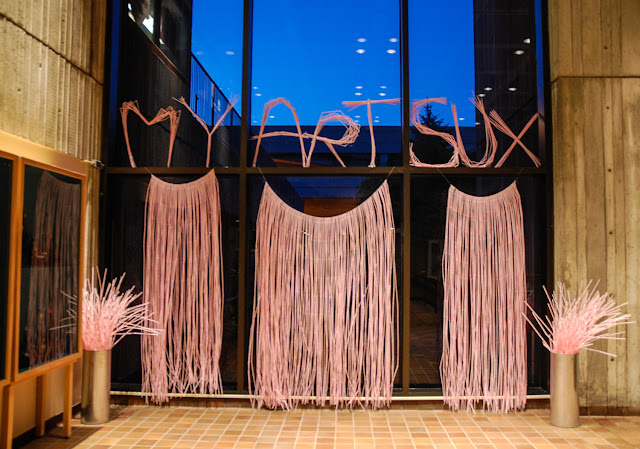