I am so excited to share the story of a precious little girl named Amelia. Her Mom, Veronica and I met several years ago, before Amelia was born, and we have since reconnected at the Janeway Children's Hospital. I asked Veronica some questions about her daughter, and have decided to share her answers exactly as I received them. Raw and real. Meet Amelia.


Tell me a little bit about your family.

We are a small family. My husband is an only child and I have one brother. Our three children are the only grandchildren on both sides. Our boys, Greg & Mace, are 16 & 14 respectively. Amelia is the 'Bonus Baby' - she came along when her youngest brother was 11. She's 3 now. 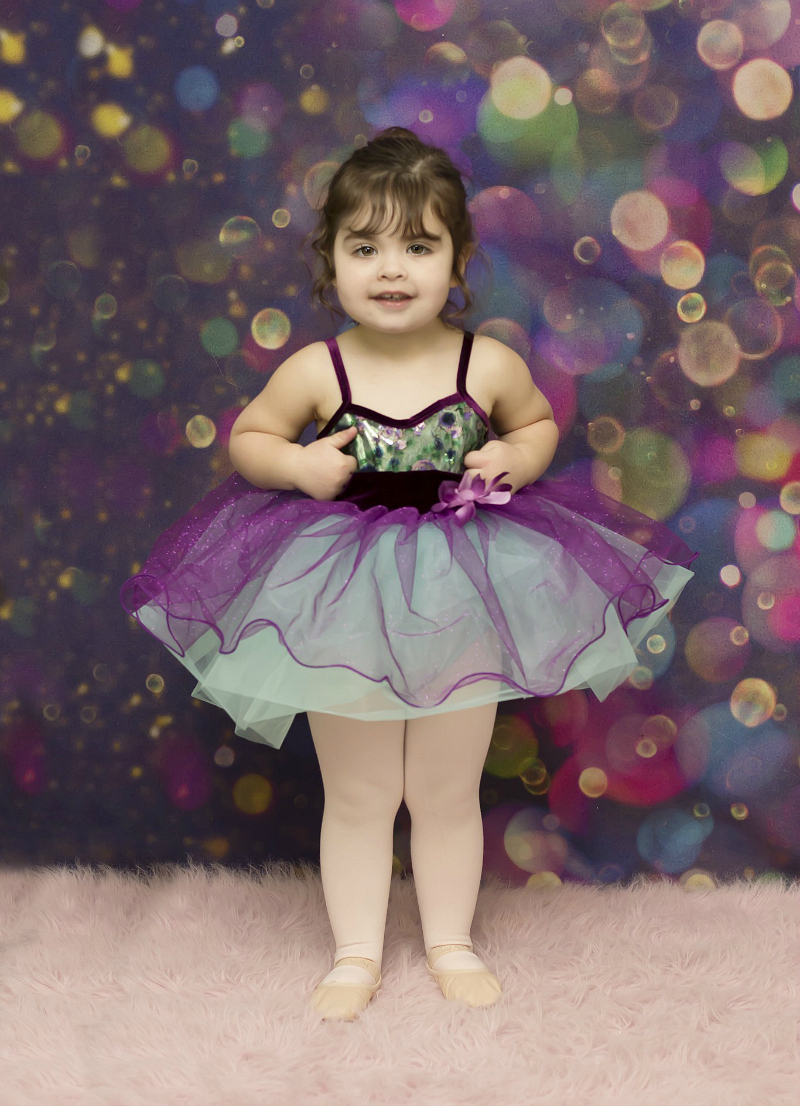 What is your daughter's diagnosis?

Her full diagnosis is Acute Lymphoblastic Leukemia (Pre B). When she was diagnosed last summer, her Platelets were 1 and her Hemoglobin was 54. Both readings are critical - potentially fatal for the platelets! She had 82% Leukemia blasts in her bones and 35% in her blood! Now she shows no signs of disease, but as Leukemia is known to hide from current medical technology, she will continue with chemotherapy through September 2020.

When and how did you find out there was something wrong?


We were camping at Terra Nova on Canada Day weekend last year. She was running to her brother and I noticed a limp. I couldn't explain it. I'm home with her all the time and hadn't seen this before. I called the doctor when we got back to town, and had an appointment for Wednesday morning, which was the next day after the long weekend. While in the doctor's office, she bled from her gums. Our doctor sent us straight to Emergency and called to let them know we were on the way. Those were her only symptoms, other than a brief fever that came and went within hours on Monday night and a rash that I noticed on Tuesday, which I now know to be petechiae.

By the end of the day on Wednesday, they were preparing us for the likelihood that it was cancer and her blood work confirmed her diagnosis the next day. 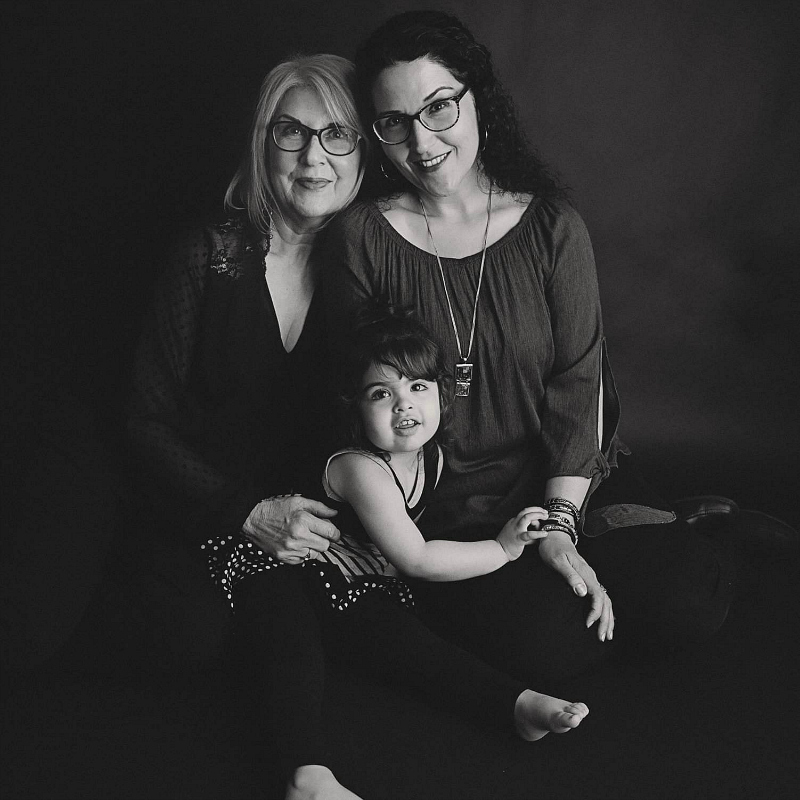 Tell us about the treatments she has had to date and what her treatment plan is for the future.


Amelia spent two weeks in the hospital following her initial diagnosis. She had 11 blood transfusions during that period. A port was installed in her chest through which to administer the chemotherapy for the next few years. This is safer and easier than having to use an IV every time, especially when chemo is sometimes given as much as four times a week. She didn't wake up from the surgery to install the port and spent five days in ICU. One day when they tried to wake her up her responses were abnormal and they sent her for testing that revealed a small pool of blood in the back of her head and they thought she may have had a seizure. That was a scary time. But she woke up a couple of days later.

Chemotherapy for Acute Lymphoblastic Leukemia (ALL) is administered in 6 phases. Each phase is a little different with phase 1/Induction being the most intense. She received her first chemo into her spine during the surgery to install the port and they continued with it per protocol even when she was in ICU. Phases 1-5 last anywhere from 28-56 days. Sometimes there is a delay due to low blood counts, then they have to wait for her to reach a minimum level of health to continue. Most of her chemo has been textbook. She is only delayed 9-10 weeks from textbook. During these phases she received chemo (most often vincristine and methotrexate among others) through her port anywhere from once every 10 days to 4 out of 7 days. She also had several medications to take at home (i.e.: 6MP, methotrexate, dexamethasone).

Right now she is in the final and longest phase - phase 6/Maintenance. This is to attack any lingering leukemia/cancer cells that can't be detected by today's technology. She gets chemo through her port now only once every 28 days, followed by steroids twice a day for 5 days. I give her another chemo drug every night and yet another once a week. She will continue with this phase/routine until September 2020.

Since her chemo began she takes an antibiotic, Septra, 3 days a week as well, and has Zofran and Ranidine on hand for the side effects of nausea and irritated belly from the various cocktails of meds she takes. Her immune system is compromised during her chemotherapy and will be for 6 months afterwards. 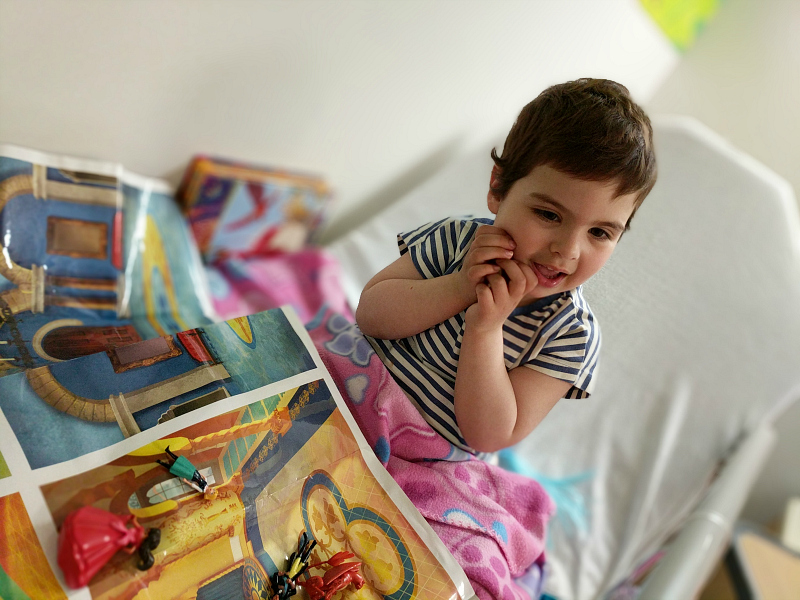 How has your daughter's illness affected your family?

It was life altering. And I thought we'd been through that already. My Dad went into the hospital unexpectedly in October 2013 and stayed in critical care for 9 months until he passed in July of 2014. I found out I was pregnant 6 months later. Amelia is that baby. She brought the laughter and joy back to everyone. She was everything you could want in a surprise baby - happy, easy to care for. Just a delight. To have her get sick, when she had just set my world right-side-up again, it was devastating. But you push through. What else can you do when it is your baby? It was a rough summer. The boys got out of school on a Thursday for summer vacation and by the following Thursday they were told their sister had cancer. Amelia didn't understand why she was in the hospital and not home, or why she couldn't go back camping.

Overall, it has made me even more grateful for my children, husband, family and friends. Amelia is one heck of a fighter. So resilient. Her brothers are amazing. They have taken extra responsibility and odd schedules and the hectic chemo life all in stride. They adore her and she adores them. My husband and I know we can face anything together. Our friends and family have been wonderful support. Our fathers have passed but our moms ROCK. My mom helps a lot with Amelia since my husband went back to work last fall (he was home the first couple of months). I am unbelievably proud of Amelia, Greg & Mace!!! 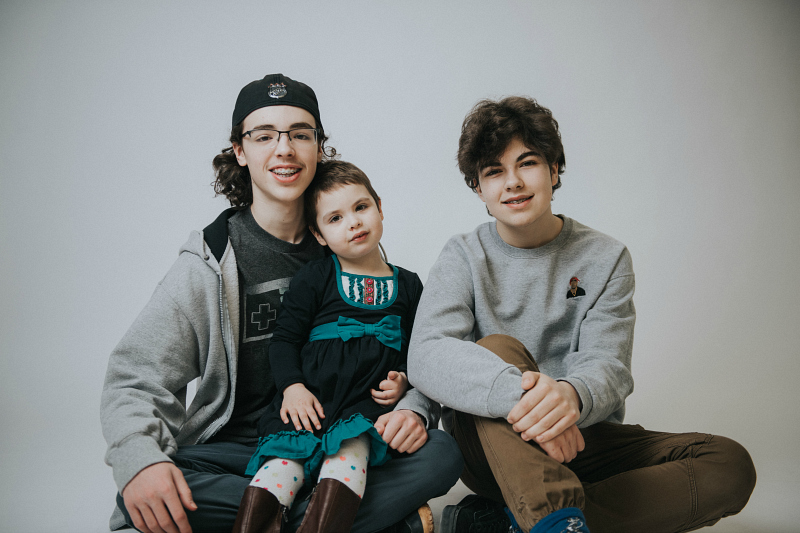 How has Amelia impacted your older children?

They were always doting big brothers, but I think it has made them even more aware of how much they love their sister. They wanted a sister even before we knew we were expecting. Watching them with her, I know they will be fantastic fathers should they choose to have children! There is the realization with her illness that anyone can become seriously ill at any time. How precious life is. That has hit home. But I think they are also learning that you roll with what you're faced with. We have continued to make good memories and make the most of our family time together. 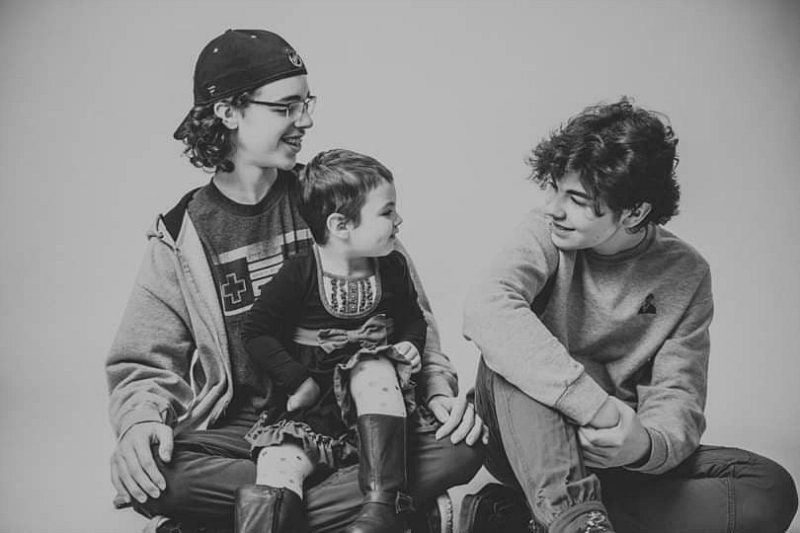 What are your hopes for your daughter?

Oh my! A long, happy, healthy life! Minimal late effects from chemotherapy. That she knows that after conquering cancer she can do anything. That she knows how much she is loved.

How has this experience changed your outlook on life?

I feel so much more connected to other people. To my friends and family who have shown up for us. To the nurses, doctors and staff who care for her. To the other parents of Childhood Cancer patients and of all sick children. One mom said to me that it's a club... One where the admission is way too high, but a loving club when you're there. She's right.

I am more likely to advocate for the charities I believe in. Where once I wouldn't want to bother you, now I will flat out ask you if you can donate to Camp Delight (for childhood cancer patients and their siblings) or if you are going to give blood! It makes me realize that anyone could be getting life shattering news at any time. When someone cuts me off in traffic I give them the benefit of the doubt. I think to myself that they could have just found out their kid has cancer, or their parent is in ICU. It makes me even more adamant in my belief that we should all be kind to one another, we can all do better and should try to do so everyday. I try to "Hope for the best, deal with the rest" and not get caught up in the details of a bad day. 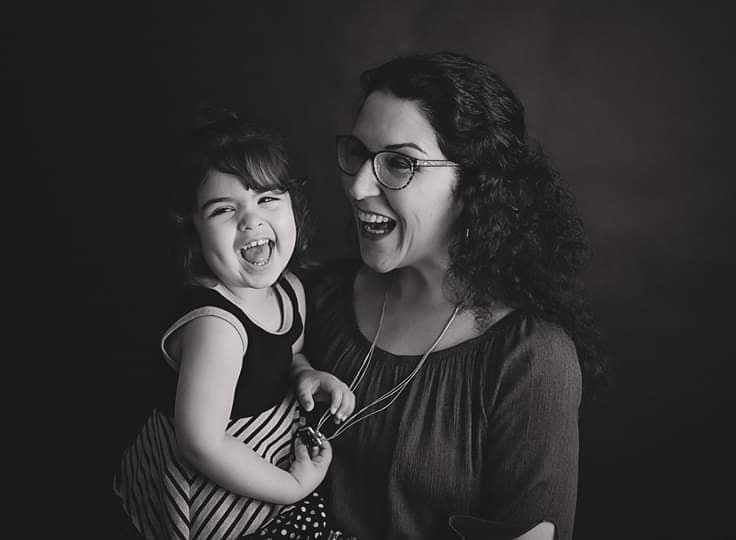 I know that Amelia has relied on blood transfusions. Can you tell us why donating blood is so important?

Amelia had 11 blood transfusions in less than two weeks. I watched that blood go into her knowing it was keeping her alive. I learned that blood has a short shelf life. Platelets last only about 7 days! There is a constant need of donors to refresh the supply. Blood often has to be sent in from other provinces when we don't have an adequate supply on hand. Donations dwindle during peak vacation times but the need for blood doesn't, so it is important to donate as often as you can.

Blood donors give such an intimate gift. It is so much more than blood - it is the opportunity to live, love, learn, run, walk, jump! It is life-saving. Some people need blood almost every day and others only during a short period, like Amelia. But it could be any of us at any time! And in order to save a life, the supply has to be there! 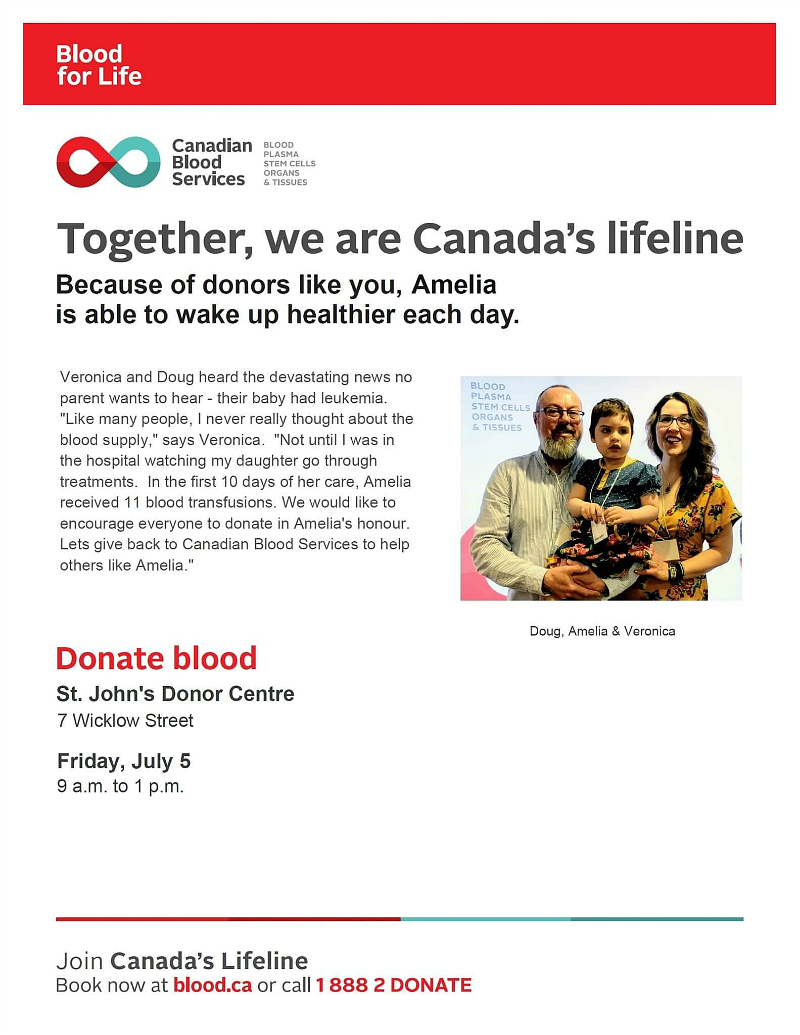