Several months ago, I shared the story of Graysen Power - the sweetest little boy who captured my heart from the instant I met him. His mother, Alice, has an incredible amount of strength and hope, and her faith is strong. She has been an inspiration to me and countless other parents of children with complex medical needs.

Graysen is diagnosed with Cornelia de Lange Syndrome, and he struggles with respiratory issues and Chronic Lung Disease. He has had a difficult road in his short life, but he has shown everyone around him what a true super-hero he is.

This past August, Graysen gave his family a bit of a scare. Alice describes their ordeal here :

Life has been an absolute roller coaster the past few years, but no ride can compare to the one we have been on lately. We were preparing to take 'Super G' home from the hospital, when all of a sudden on Tuesday, August 12th, Graysen got into some trouble. As the days went on, his situation became more and more severe. He looked to be comfortable but his blood-work and x-rays told us otherwise. Graysen was on life support and the amount of ventilation he needed was so high that we were warned that two things could happen - Graysen's heart could stop or his lungs could potentially burst. So, we had a decision to make. If either of these things happened, what were we to do? Do we bring him back, or do we let him go? At first, I screamed out that whatever we were faced with, I wanted everything done to try to bring him back. When I realized what I had said and understood what pain and suffering were involved, I was no longer so sure. I thought that my answer was that of a selfish mother who just couldn't picture her life without her baby boy. In reality, what is the right answer? The truth is that there is none.

We sat at Graysen's bedside and watched and waited to see what the outcome would be. In all honesty, it was like watching a bomb ticking, just hoping it wouldn't go off. He became so full of fluid, he was almost unrecognizable. I was afraid to leave but I was afraid to stay. Finally, I bent down and whispered in his ear, "If you want to stay, Mommy would love that so much but if you can't baby, Mommy will be okay. You do what you've gotta do." I went home that night simply because I hadn't seen my girls in what seemed like months. I had to try to make things as normal for them as possible. I played over in my mind how in the hell I was going to explain to them that Graysen was not coming home. How do you even begin that conversation?! I wasn't prepared to have that conversation, not tonight, not ever. I wanted to wake up, to never dream this nightmare again. But I knew that wasn't going to happen. I couldn't sleep, afraid to sleep because I knew I had to wake up and face this all over again. The next few days were touchy but things were stabilizing. The doctors were a little more confident that we could get him through this ordeal. He started to wake up and although he was uncomfortable, his numbers were good, his x-rays were looking better, and he was AWAKE! The breathing tube was taken out and he looked to be strong enough to do it on his own. He lasted twelve hours until his left lung began to collapse again. Graysen was put back on a bi pap machine, and we still have not gotten to the cause of his breathing difficulties.

I asked if we could get some other opinions from some other hospitals. Graysen's information has been sent now to another center in Canada, with another in mind as well. If nothing comes of it, that's as far as the Janeway can go, as MCP will not cover any out-of-country visits, but that's not to say that I won't do it! I can't believe for one second that in this great big world, there's not someone out there who can help us. I will not stop until I find an answer because if I don't do everything in my power, I will know that I've failed.

If anyone has any suggestions on other hospitals that deal with chronic lung disease, ANYWHERE, please let me know as soon as possible. For now, we wait and see.

Today, Graysen is celebrating his second birthday! He has been stable and doing well these past few weeks, and his family are thrilled to be able to celebrate this special day in the "Party Room" of the Janeway hospital. I spoke with Alice earlier today, and she was is great spirits! She posted an update this afternoon, which she permitted me to share as well. Alice, you are remarkable. I admire your strength. Enjoy this day with your beautiful two-year-old boy!!

The past two years have been a lot of things. Emotional pretty much tops the list. Terrifying is up there too, but they've also been extremely inspirational!! Graysen has taught us all the true meaning of love, patience, and acceptance. He has driven me to be not just a better mom, but a better person overall. Life has been topsy-turvy, upside down and back again but I wouldn't change a single thing. My life wouldn't be complete not being this way. I've met some amazing friends along the way and wouldn't have done so otherwise. I am grateful for all of you, you all know who you are!!!! We have grown together so much as a family. We realize now that there is so much more to life, and everything, and I mean EVERYTHING is a blessing!!!! Although sometimes it may be in disguise, it is always there.
About six weeks ago when Graysen got really sick, a conversation took place. We were talking about where things were going and what the plan was. There was question if Graysen would even pull through. I knew he would, he just had to. Over the following few weeks there were more meetings and conversations. I have to ask you all now, has anyone ever been accused of having too much faith? I was.

I was reminded that Graysen sits on the extremely severe side of CdLS. I was told that children like Graysen, with severe health issues, don't have a very long life expectancy. When the meeting was over I cried in the washroom for over an hour. Then all of a sudden it hit me. "This is foolish". I went back to the unit, sat down, picked up my great big boy and like in my favorite book by Robert Munsch, I slowly rocked him back and forth, back and forth, and while I rocked him I sang "I'll love you forever, I'll like you for always, as long as I'm living, my baby you'll be".

The next day I woke up and I felt on top of the world. I know this may sound completely and utterly crazy, but I was on a mission. People asked how I was coping with the new news? I said I was just fine. I was reminded of the conversation that had taken place and asked again how I felt. Again I said I was fine. I think people were beginning to worry about me. This is when the mention of having too much faith came to be. I was told that it might be for the best if I step back and really see the situation as it is. Graysen is not going to live a long happy life. There will come a time when nothing will save him. Let me just say one thing - I'm not an idiot!!! I am well aware that things are not ideal. I realize that the way things are, Graysen will never outlive his Mommy....but I'll tell you what I am....I'm a Mommy who loves her son so very much that I would rather embrace what I have as opposed to sit and wait for..........

So here we are today, The Big 2!!!!!! I thank God with every ounce of my being for sending me my son! He has made our lives complete. He has touched so many people's lives and pulled on a few heartstrings along the way. But the fact of the matter is, he's HERE!!! So as I finish this post and you go on about your day, please don't be sad for us. Please don't send any pity our way. You should actually envy us. We are a family that is held together by the bond that Graysen has created. So all I really have left to say is, don't cry for us Argentina, WE GOT THIS!!!! 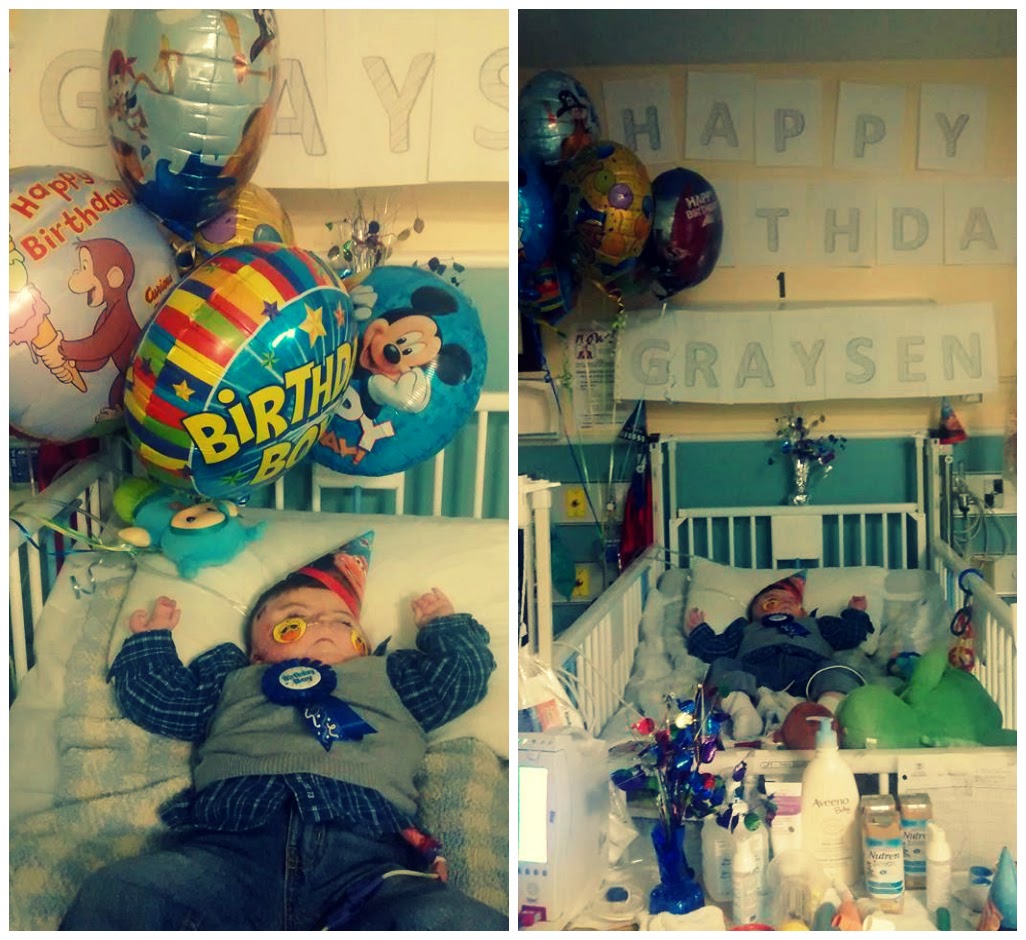 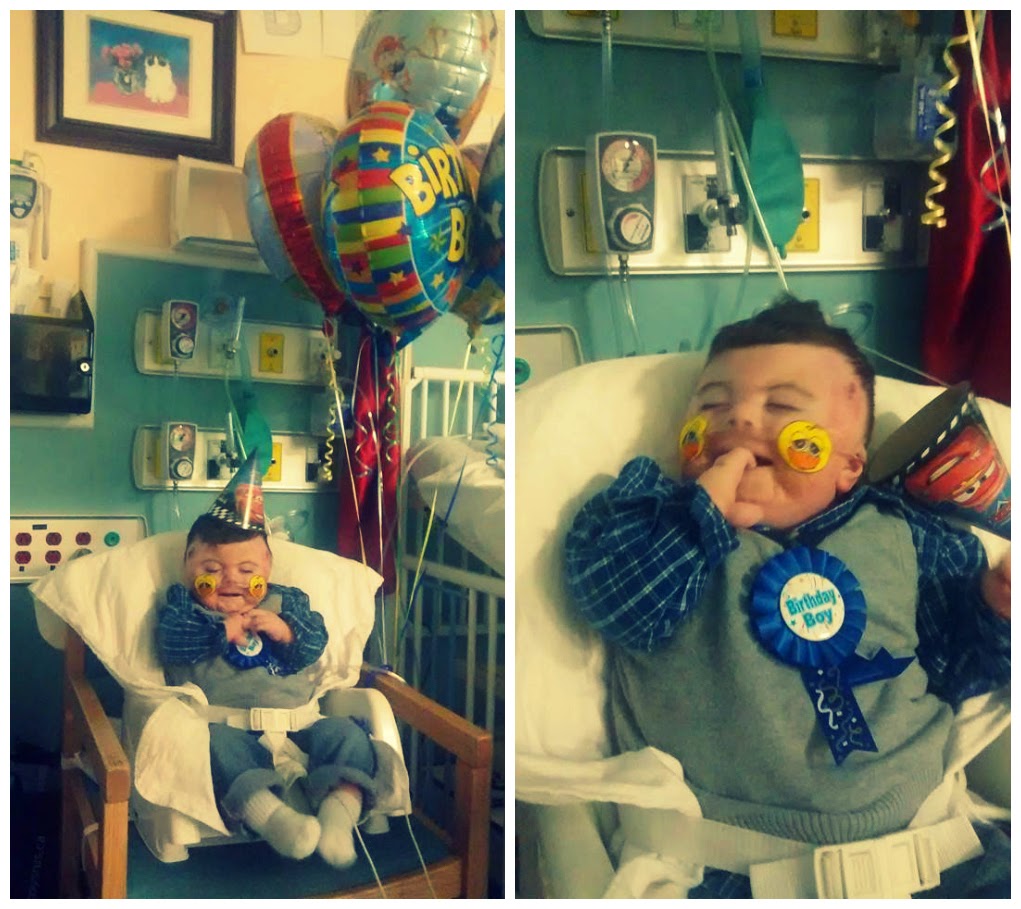 The happiness and joy you bring to your family and to those who know you is a precious gift. You are the image of strength and determination, and you are a true fighter in every sense of the word. Graysen, I wish you many more happy birthdays!